The Caspersen School Alumni Council in conjunction with Drew University’s Department of Alumni and Parent Relations, hosted its FIRST Caspersen School of Graduate Studies Alumni Open Mic “Café” Event on Friday, October 25, 2019 from 7 to 9 p.m. Alum and Grad students came out for a wonderful evening of fiction, non-fiction, and poetry readings, along with a few musical performances. Wine and appetizers were served. The Alumni Council looks forward to planning future events and hopes to continue to expand its membership. (Current Members include: Kirk Johnson T’12, G’16, President, Yasmin Acosta C’17, Kathleen Lyons, G’13, Maximillian Orsini C’16, and Hettie V. Williams C’17. Special thank you to Carol Bassie, Director of Alumni & Parent Relations, for all of her support. 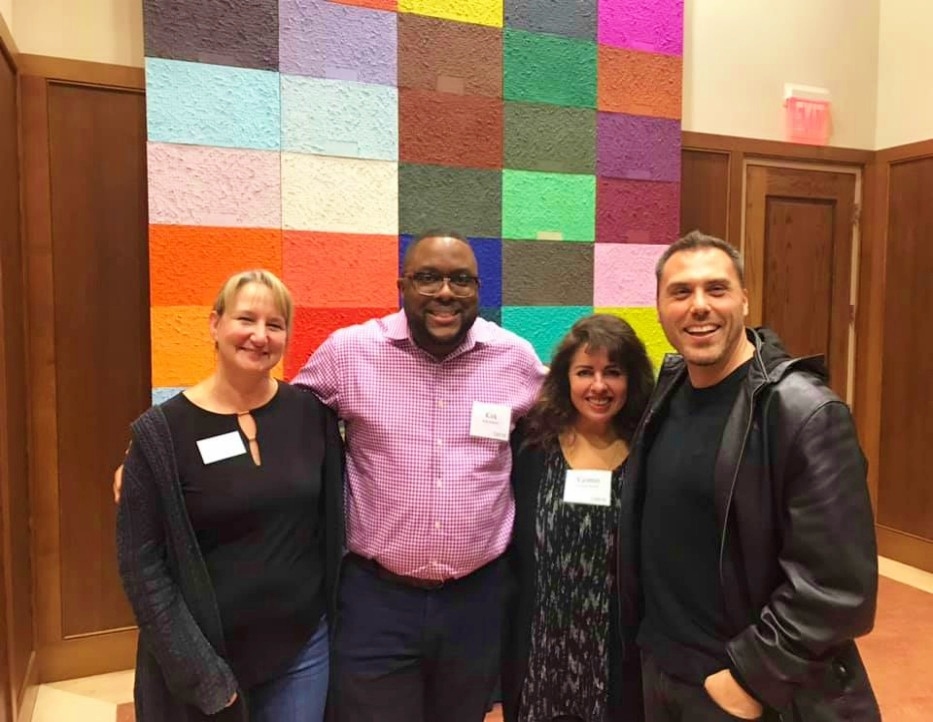 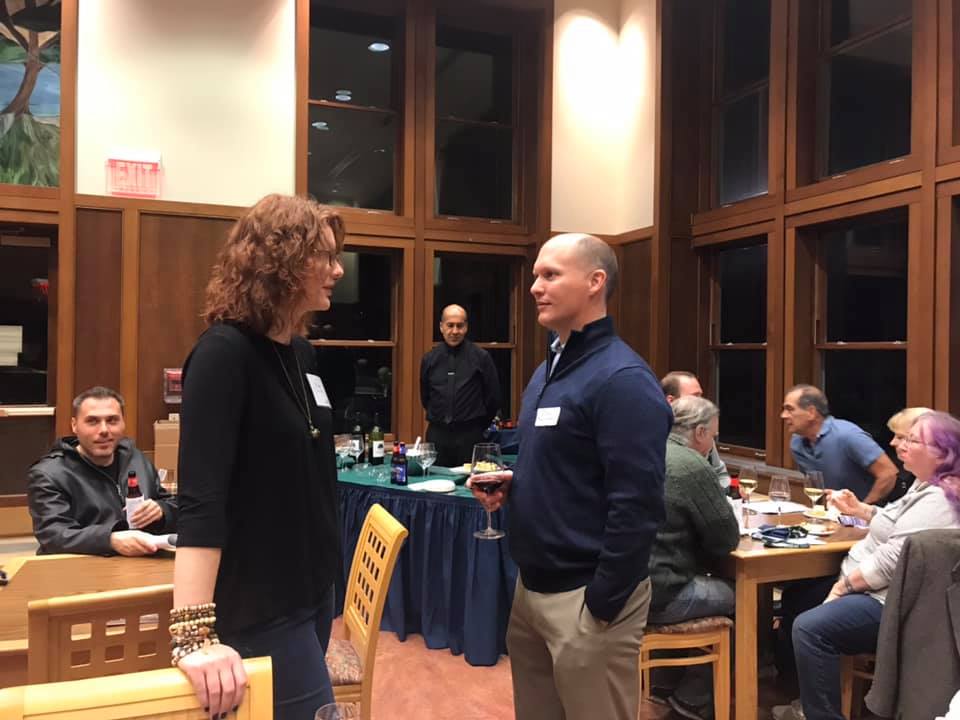 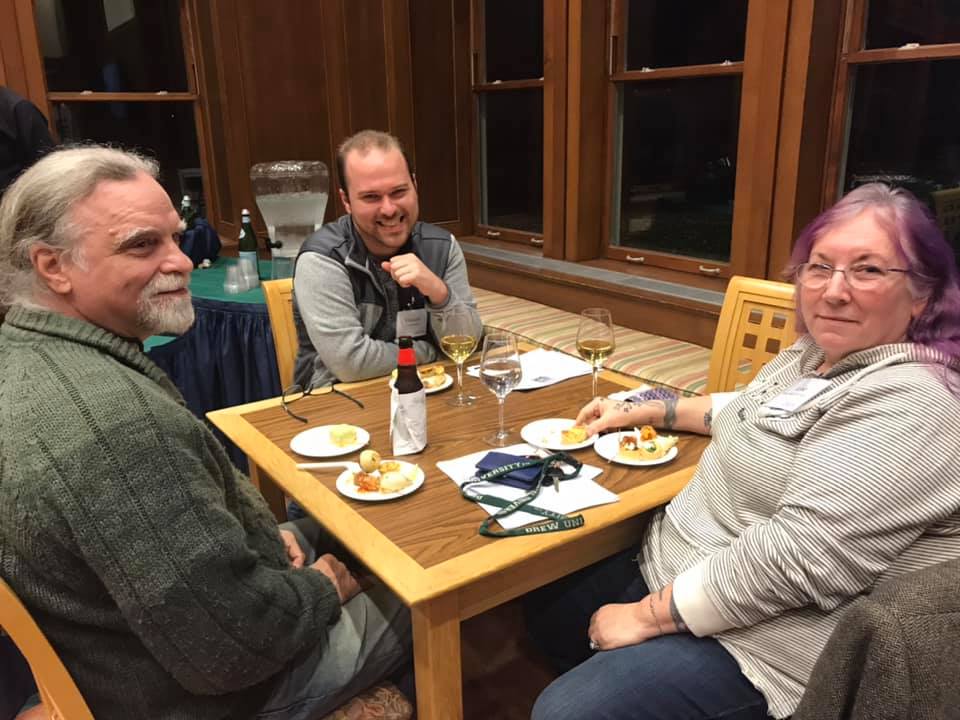 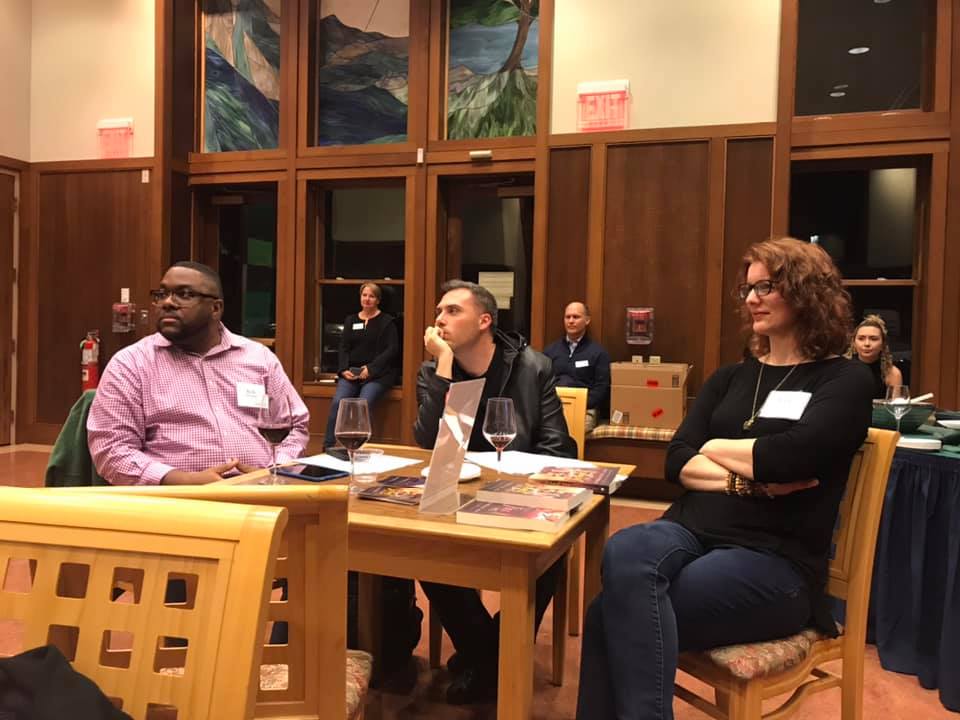 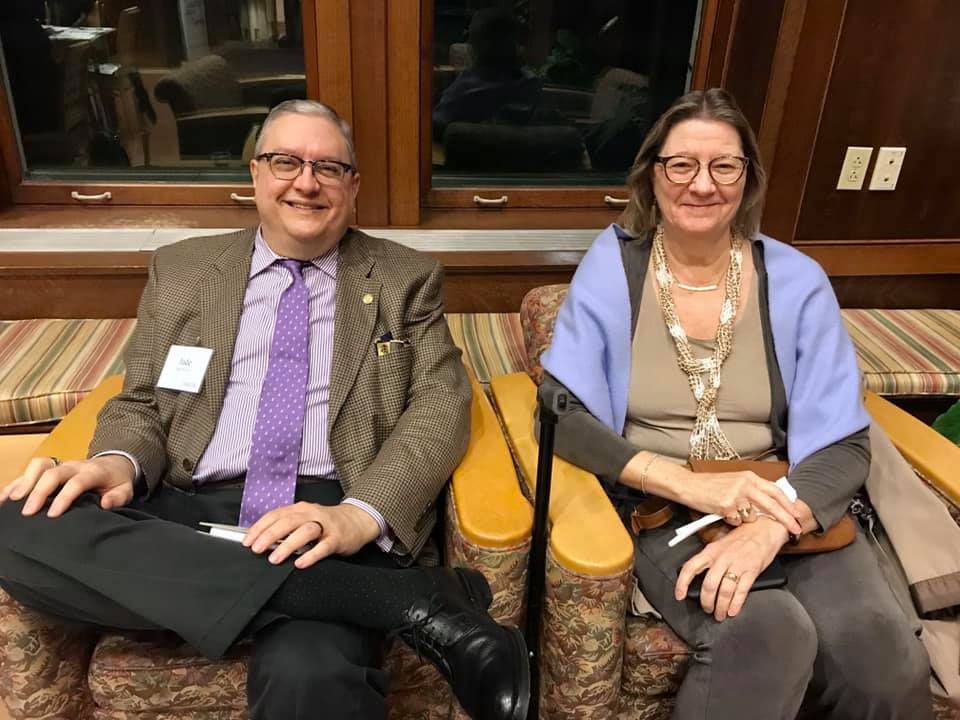 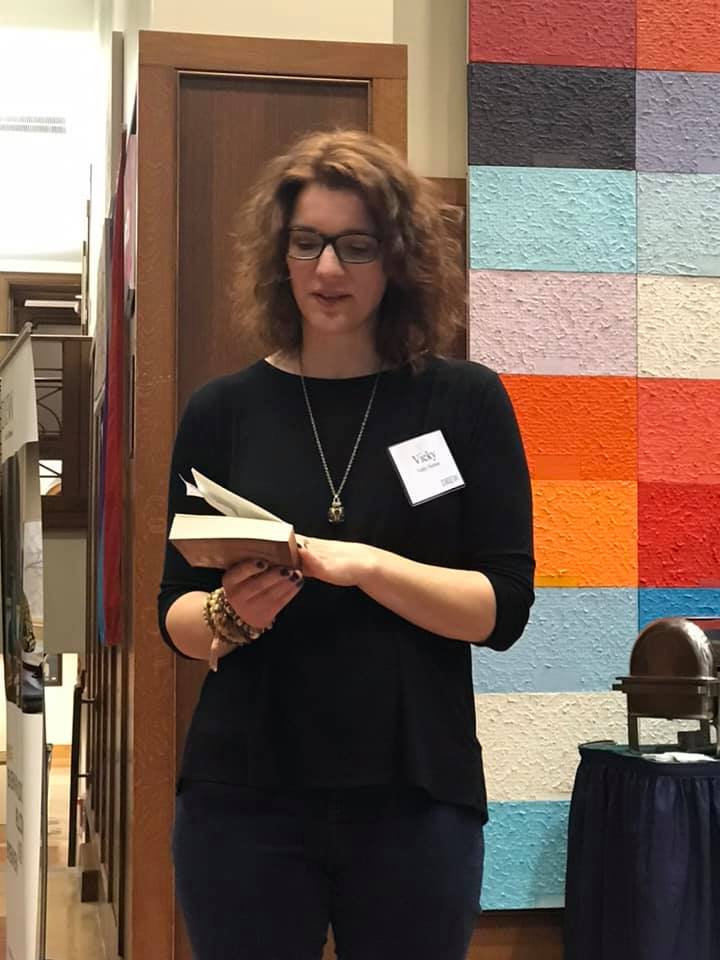 Vicky Norton writes contemporary romance and romantic women’s fiction as Kimberley Ash. Vicky writes romance because she believes everyone deserves a happily-ever-after. Her latest work, a trilogy, centers around three half-brothers who have spent their lives apart, and the smart, sassy women who take their hearts. 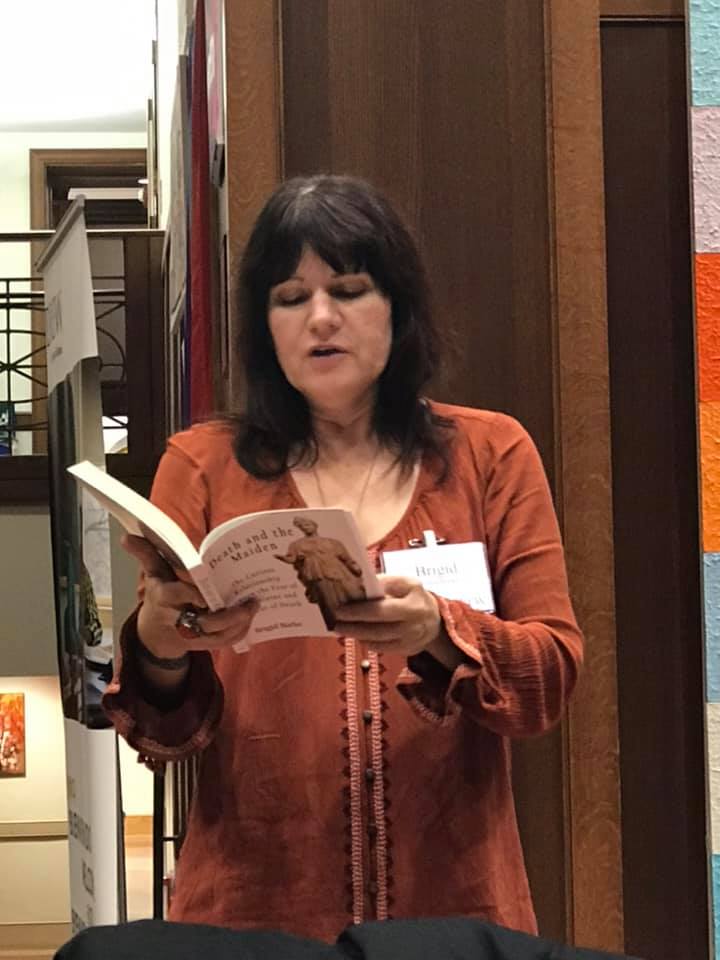 Brigid Burke is a 2016 graduate of the D.Litt. program. She currently works at Fairleigh Dickinson University as the Associate University Librarian for Technical Services, and teaches in the Religion program at Montclair State University part-time. Her book, Death and the Maiden: the Curious Relationship Between Fear of Death and Fear of the Feminine came out about a month ago, and is a revised version of her Drew doctoral dissertation. The thesis of the book suggests that our beliefs about life after death affect our views of the feminine; in particular, that a belief in salvation has a negative impact on our views of everything “feminine”–sexuality, emotions, intuition, and passivity to name a few examples. Her website, chthonia.net, (ka-thone-EE-a) features her bi-weekly podcast exploring feminine goddesses and other folklore beings connected to the underworld, along with a link to her current book and other fiction writing that is currently in progress, all related to the subject of the dark Feminine. Brigid read an excerpt from the introduction to her book. 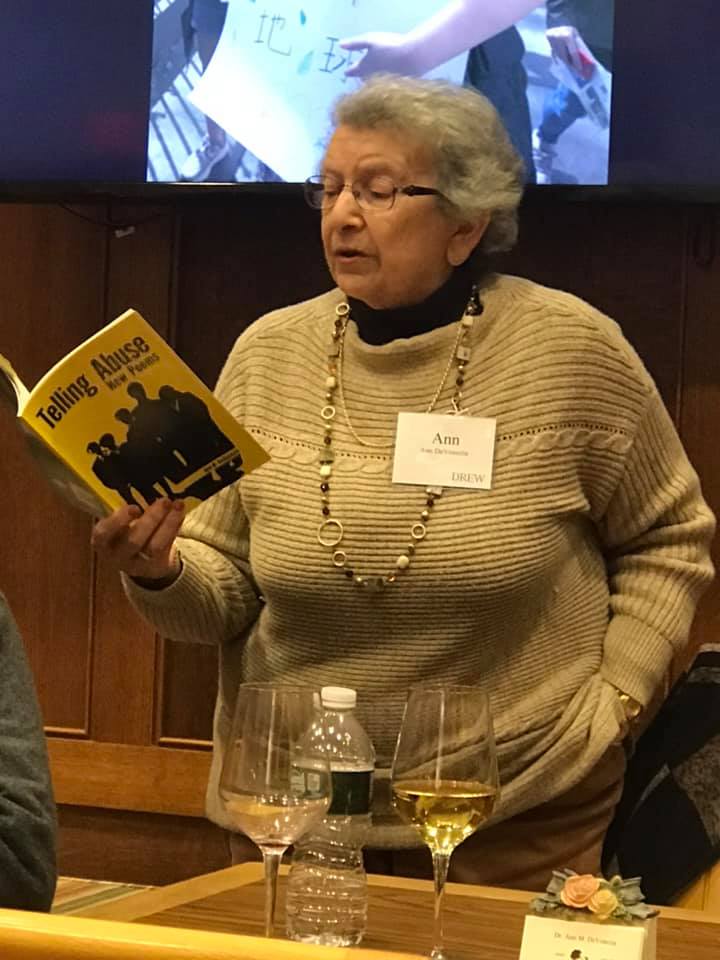 Dr. Ann M. DeVenezia, M. Litt. (1990) and D. Litt. (2000), turned to writing poetry, following her 1998 retirement from teaching high school English. Her work appears in a variety of over 40 publications, and she has made over 80 appearances during the past 20 years. Ann draws upon her Italian heritage in Madison, New Jersey, as part of the Rose City’s rose growing industry for her first book, Grave Rubbings. Dreams and visions provide inspiration for Riding My Tricycle. News articles and experiences are turned into verse in Telling Abuse, not a pretty picture; however, these poems hold the beauty of telling the truth. She read selections from each of her diverse collections.

Amanda Aller is a second semester senior with a Music major and Film Studies minor at Drew University. Since transferring to Drew in the Fall of 2017, some of her most influential classes have been History of Jazz, Music and Film, Music Theory II and Twentieth and Twenty-first Century Composition. In her senior year, she’s performed at Music at Noons’ and wrote a composition for the Cello and Harp which was performed in the Drew University Concert Hall. In her final Capstone Project, she made a music video which combined her experience in videography, music recording and music composition. 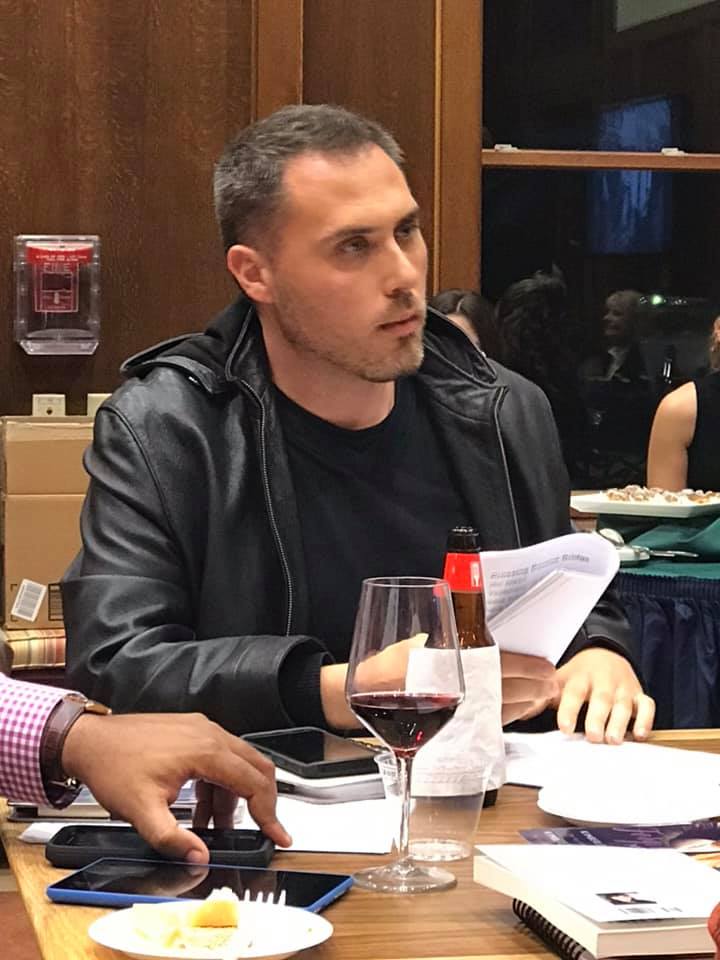 Dr. Max Orsini earned both his Master’s in English and his Doctorate of Letters from Drew. He serves as Drew’s Graduate and ELL Writing Specialist, and simultaneously instructs undergraduate courses in English, Writing, and American Studies. He is the author of the book, The Buddhist Beat Poetics of Diane di Prima and Lenore Kandel . Max read two of his poems.

Dr. Jude Pfister is the Chief of Cultural Resources and Curator of the Morristown National Historical Park Museum and Library and has been at Morristown since 2004 in the field of historic preservation and cultural resource conservation since 1993. Prior to 1993, he worked for the Delaware State Archives. Dr. Pfister oversees the museum, archival and library programs at Morristown and has as his goal the integration of the separate disciplines into a single unit representing our cultural heritage. He earned his Bachelor of Arts degree from Delaware State University in 1991, his master’s degree from Washington College in 1993 and his doctorate from Drew University in 2007. He is the author of The First Decade of the United States Supreme Court, The Jacob Ford Jr. Mansion, The Fords of NJ: Power and Family During America’s Founding, and several articles and reviews. In 2010, his book The Jacob Ford Jr. Mansion was awarded the Eastern National Board of Directors Author’s Award. He also lectures regularly. He read from the preface of his 2014 book, America Writes its History, The Formation of a National Narrative. In the preface, aside from introducing the book to readers, he discussed the varieties and vagaries of historical writing and encourage readers to interrogate history.

Anne Nadel-Walbridge hails from Brooklyn, via northwestern New Jersey, and is a former career journalist and editor, as well as an artist. She is a published poet. She got her bachelor’s degree from Drew in 1986 and returned last fall for her graduate studies after feeling the pull of the campus when her daughter graduated from Drew. Anne is one of the 2019 Drucker Arts of Respect fellows. She is beginning her thesis, which mildly terrifies her. The poem she read, “Apropos of nothing on an eastbound train” is a product of her Drucker fellowship work. 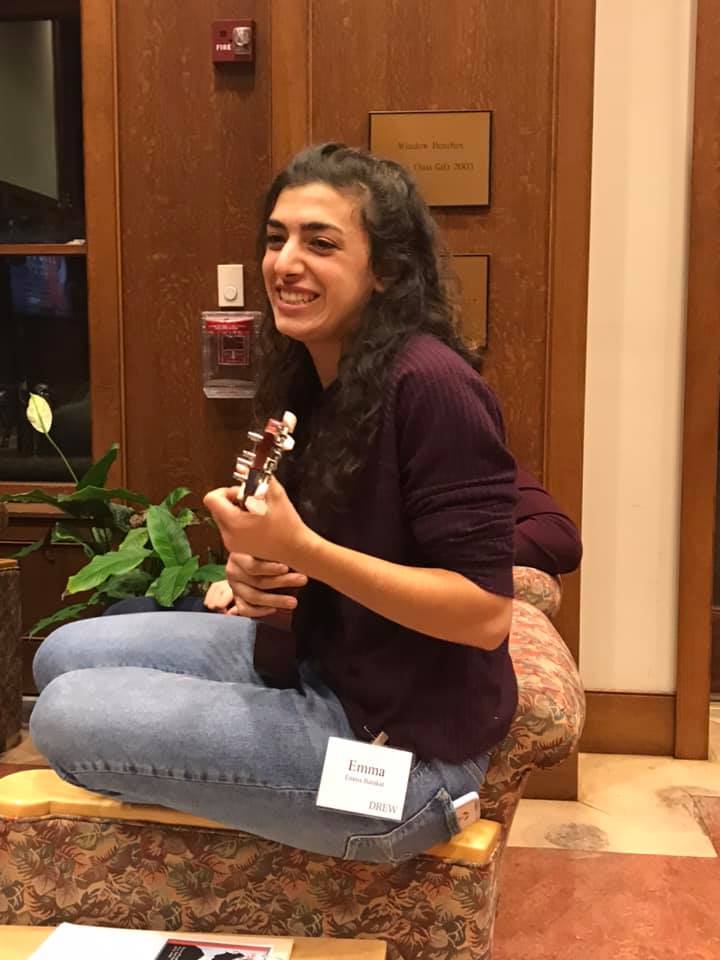 Emma Barricat graduated from Drew University’s College of Liberal Arts in 2017 with a B.A. in Theater Arts, and Drew’s Caspersen School of Graduate Studies in 2018 with an M.A.T. in Theater and English. She is currently the Technical Director in Drew’s Theater Department and the Master Carpenter at the Pingrey School. Emma played an original composition on guitar she calls, “It’s Temporary.” 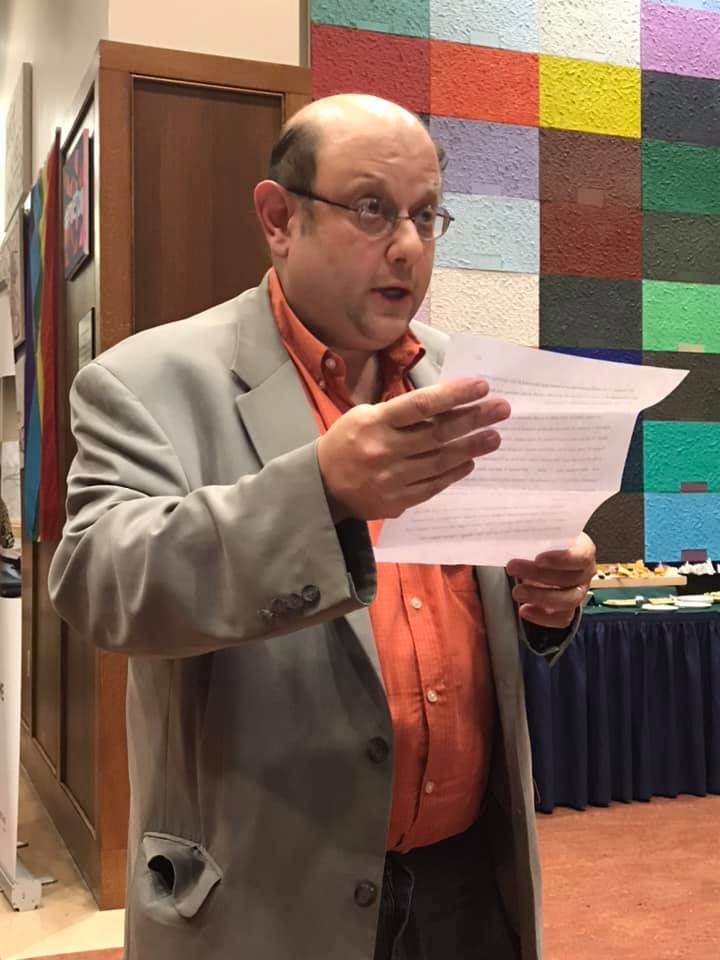 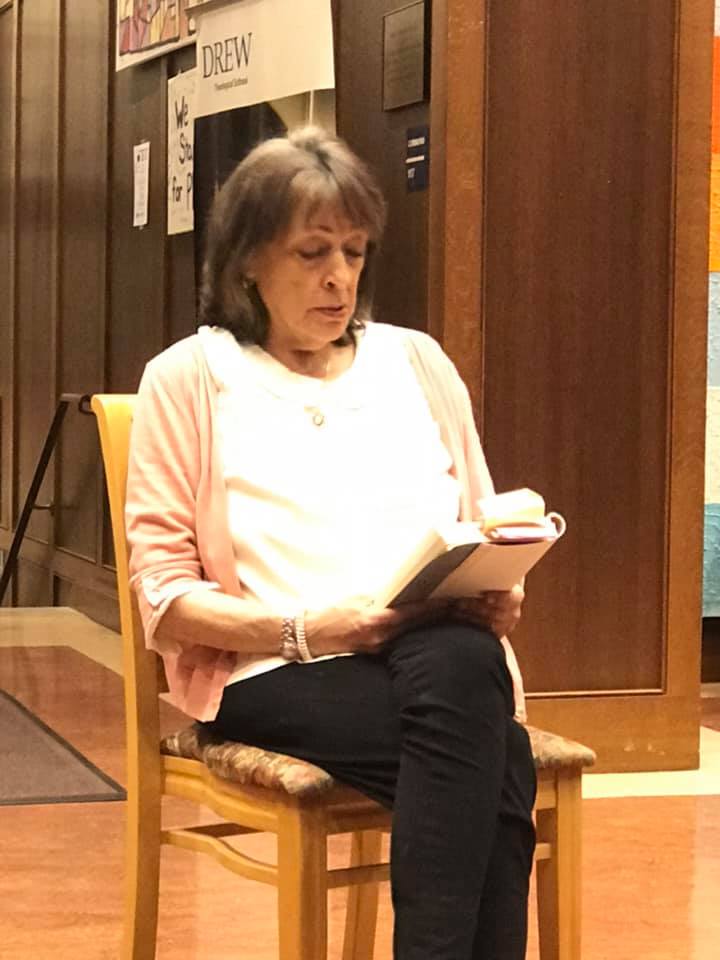 Patricia Palermo is a Southern California native. She earned her BA in English and History, and her MA in English, in California. She came to NJ in 1992 and earned her MPh from Drew in 1996. She went on to earn her PhD in English in 2007. She loves animals, New York, the theater, traveling, reading, writing, and puzzles. Patricia read from her book The Message of the City: Dawn Powell’s New York Novels, 1925–1962. It’s about the wonderfully witty and too often neglected novelist, playwright, diarist, and short-story writer Dawn Powell. So prolific was Powell that Patricia could devote her book to only half of her works. Ohio-born, Powell took a train to NYC when she graduated from Lake Erie College in 1917 and lived in the Village until she died in 1967. 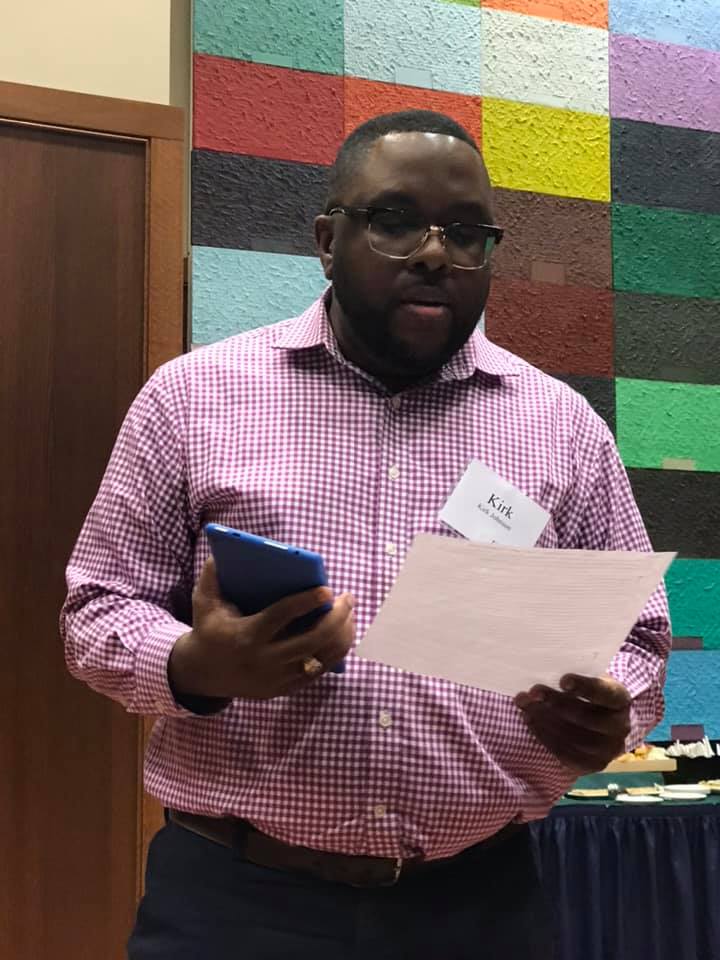 Kirk Johnson received his B.A. in Religious Studies with a minor in Political Science from Seton Hall University in 2009, his M.A. in Divinity from Drew University in 2012, and his Doctorate in Medical Humanities from Drew University in 2016. He is an Adjunct Professor of Philosophy and Religious Studies at Seton Hall University and Berkeley College. His areas of research include caregiver-patient relationship, theology and medicine, Bioethics, and Race and Medicine. He has published numerous articles and read from an excerpt from his book Medical Stigmata: Race, Medicine, and the Pursuit of Theological Liberation, along with an original poem.