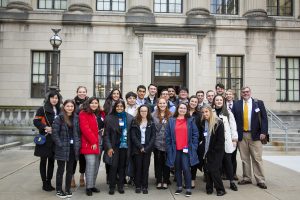 November 2019 – Drew students got to see the New Jersey government in action during a class trip to the State House in Trenton.

The immersive experience provided 22 students from Professor Patrick McGuinn’s “State and Local Politics” and “Education Policy and Politics” classes with an up-close look at the machinations of state government, as well as a chance to speak with some of the people who make the system go.

The excursion was designed to serve several purposes: getting students excited about what they’re learning in the classroom; creating a hands-on look at the real-world application of the material; and career networking opportunities with enthusiastic alums.

Here’s a look at the day’s itinerary, in the words of the students on the trip.

“I’ve always heard about lobbyists but I never understood exactly what they do. In House of Cards and on TV they’re always the worst, so it was really interesting for her to be so honest about her work. She was so passionate about it and what she does and how it could benefit the people she cares about. It’s a lot of wheeling and dealing, but I always thought it was for their own gratification and special interests. It reinforced my hope in the government because so much seems to be done behind closed doors, but this showed me it can do good for other people.” – Sunny Andersen C’20

“The No. 1 thing she got across to me was her persistence in her dream as a diverse woman. I’ve looked up to her so just to meet her was really cool. You don’t see a woman and a minority at the same time in her position. And she really answered my question about how to improve diversity in the classroom. Lots of politicians seem to be fake-it-till-you-make-it, but she answered my question by answering my question and giving examples, like starting with measures to get more minority teachers in classrooms. She didn’t just give me stats and facts and talking points. She gave me the how.” – Kareena Salvi C’23

“I just wanted to ask him a few things and see if I’d get some answers that I would agree with. I didn’t get the answers I was after, but I still think it was worthwhile just getting to hear what a politician as high up as the governor has to say. Between that and seeing the state legislature in action during the open sessions, it was incredible.” – Brett Philip C’22

“You could tell we came from really different perspectives, but just to have that interaction with the treasurer as an undergrad was awesome. Our conversation taught me that there are definitely decisions that have to be made that are unpopular from a voting perspective—like raising taxes—but to hear about all the things that go into those decisions, like having to make up for bad decisions by past administrations, straight from the treasurer was insightful.” – Adam Sandonato C’20

“I sat in on the committee for housing and community development. We were talking about how emotional one of the testimonies was when a man was talking about how the issue impacted him. We were really surprised to find the politicians really listening and taking their constituents’ stories into account when making legislative decisions. You don’t think about your politicians listening and caring about the common person, but they really did and they really wanted to.” – Cassidy Conklin C’22

“It was really interesting to connect with alumni. It was really relatable knowing they were once in the same boat as us as Drew undergrads. Their advice to seek out and embrace internship opportunities within your particular area was really helpful. It was a great way to end the day because it really tied everything together.” – Jenna Chierchia C’21