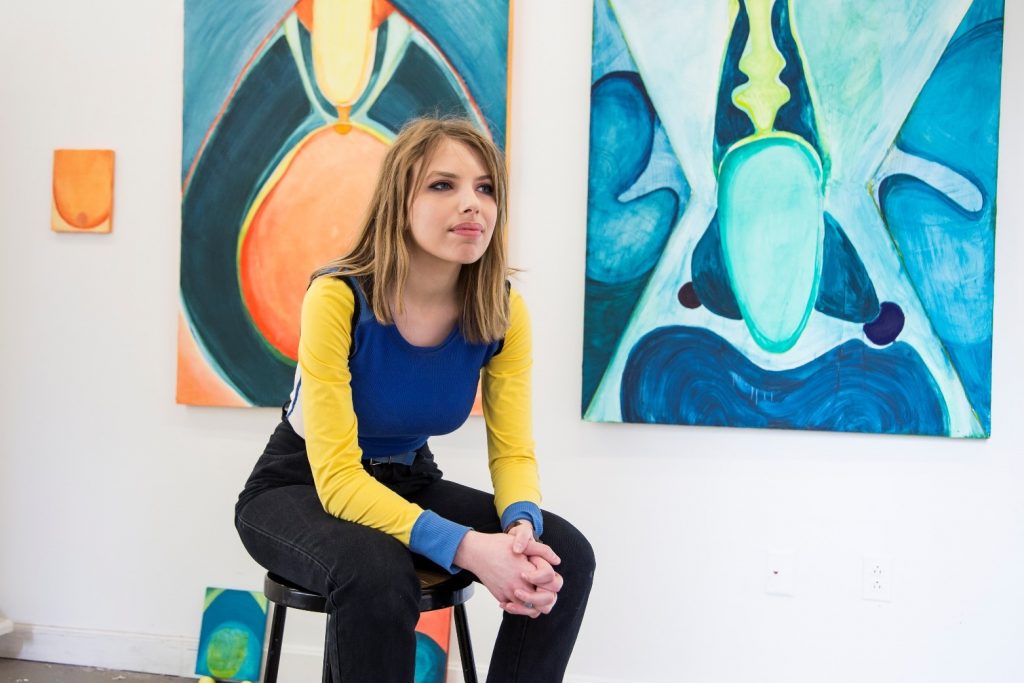 Shayna Miller graduated from Drew University in 2019 with majors in art and art history and minors in comparative religion and medieval studies.  She was a Baldwin and Civic Scholar and was awarded the Stanley Prescott Hooper Memorial Prize in 2019 for promise and integrity in studio art.  Her work is in the collection of Drew University as well as numerous private collections.  She recently co-curated an exhibit, New York Semester on Contemporary Art: The First Decade, 1967-1977, at the United Methodist Archives and History Center in Madison, NJ.  Her body of work explores her relationship to mysticism and the body, as well as an interest in process as ritual through painting and sculpture.

Born and raised in New Jersey, she was attracted to Drew because of the quality of the programs, the connections in New York City, and the Baldwin Honors and Civic Engagement program.  She felt Studio Art, Art History, Comparative Religion, and Medieval Studies, informed each other. Shayna said, “I see Comparative Religion as a study of material objects and sacred spaces.  These ideas inform the paintings that I make today.  The areas of study all challenge me to think more critically.  By combining these different areas, I am able to apply knowledge and experiences from one discipline to understand another.”

While at Drew, Shayna worked in the art department as a gallery and studio assistant.  In that position, she installed shows in the Korn Gallery, sent out press releases, and monitored the gallery.  She also tutored comparative religion and art history classes at the Center for Academic Excellence and worked as an assistant in the United Methodist Archives.  She also coordinated the Arts of Respect Grant through the Center on Religion, Culture, and Conflict.

Shayna completed three internships while a student.  In 2018, she interned at Pace Prints on 57th Street in Manhattan.  Pace Prints is a gallery affiliated with Pace Gallery that publishes prints and editions.  Shayna said, “This was an exciting opportunity as I was able to learn about how commercial galleries operate.  In 2017, I interned at the Visual Arts Center of New Jersey in Summit with their Education department.  In that position, I was able to learn about the operations of an arts non-profit.  In 2016, I interned at Historic Speedwell in Morristown, New Jersey.”

One of her favorite classes at Drew was the New York Semester on Contemporary Art.  In NY semester, she visited galleries, museums, artists’ studios, and other places such as the offices of an art magazine and met with artists, gallerists, critics, curators, and arts conservators.  Shayna said, “Seeing the wide range of career opportunities was exciting as was seeing artists working in their studios.  I think that the program instills confidence in everyone who participates due to the opportunity to see the different types of career opportunities available and meet with people working in the field.  The program prepared me to have an understanding of the NYC art world and gave me a familiarity with the different galleries, institutions, and contemporary artists.”

Some of her favorite classes at Drew were painting courses with Professor Jason Karolak, a Special Topics course in watercolor/water-soluble media with Professor Claire Sherman, and New York Semester on Contemporary Art with Professor Kimberly Rhodes.  She said, “All of these courses were closely aligned with my interests and exposed me to new ways of thinking about art.”

One of her favorite memories is having the opportunity to co-curate an exhibit (New York Semester on Contemporary Art: The First Decade, 1967-1977) with Professor Kimberly Rhodes in the United Methodist Archives on the history of the New York Art Semester on Contemporary Art.  Shayna said, “It was exciting to gather archival material that told a story about the initial years of the Art Semester in the 70s and the important artists and critics that were involved.” Another favorite memory was Senior Studio, a course in the art department that is taken over the two semesters of the senior year.  Shayna said, “This course gave me the opportunity to develop a body of work in my own studio space.”

How long have you been creating art and what inspires you?

I have been interested in art throughout my life, but I started pursuing it seriously in college. The work I am creating is an investigation into ideas related to ritual. I think this came from both an interest in religious practices as well as studying different religions while at Drew.  I set up parameters for making these paintings.  Working primarily in oil paint, I can manipulate, subtract, and alter forms by scrubbing and dragging paint across panel surfaces using rags and other materials.  The paintings are direct; I do not make preparatory drawings for these as the forms come out of the process of wiping paint on and off of the surface.

You mentioned in your bio that your paintings release a talismanic energy during and after creation.  Could you talk a little more about this energy?  Is it a visceral, physical feeling or more of spiritual experience?

I think the energy begins when the painting is being created because I think of the paintings as capsules that hold something within.  This would be similar to an object used for religious purposes that is meant to ward off evil, like an amulet.  The energy is not necessarily something that I directly experience.  It is a protective or talismanic energy. 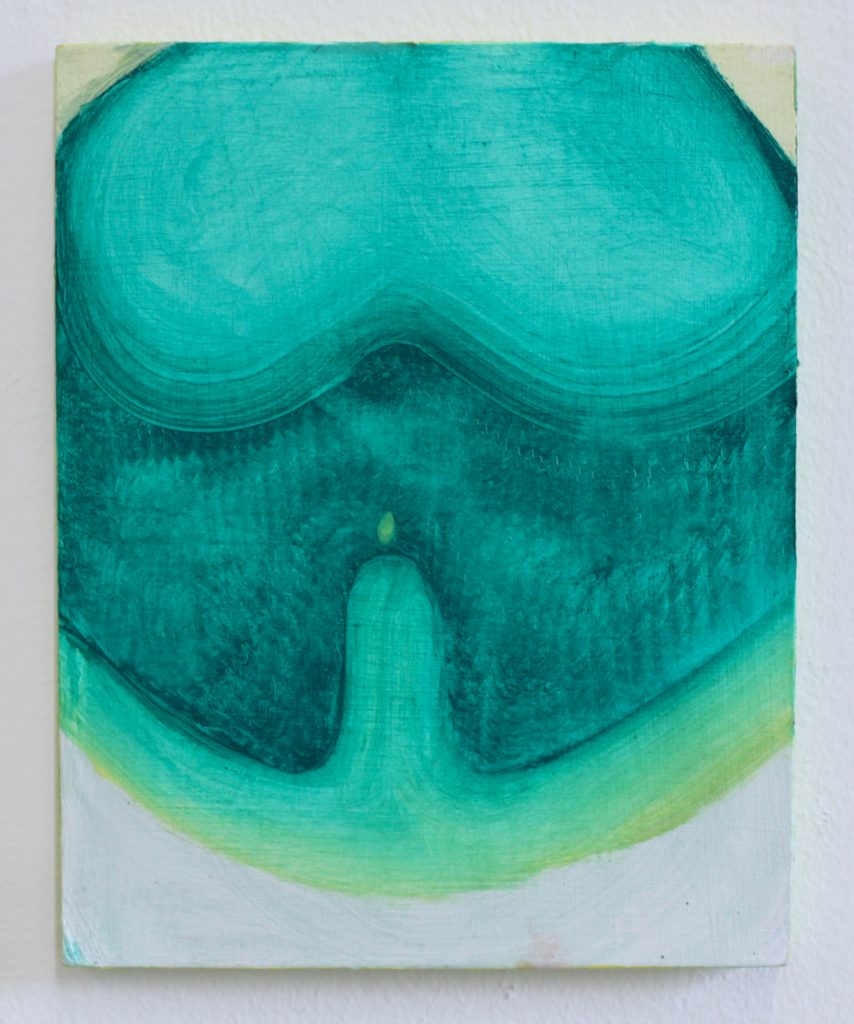 Are all your titles related to Jewish rituals?

The titles usually come from Hebrew words that relate to specific rituals or mystical ideas.  I have specific reasons for choosing certain words.  A lot of the words refer to rituals involving cleansing which also alludes to the way that the paintings are made, through scrubbing and perhaps washing paint on and off of the surface.  This body of work is a way to investigate both my own ideas as well as the wider culture surrounding religion so I think that using primarily Hebrew words relates to my own personal experiences within religion. 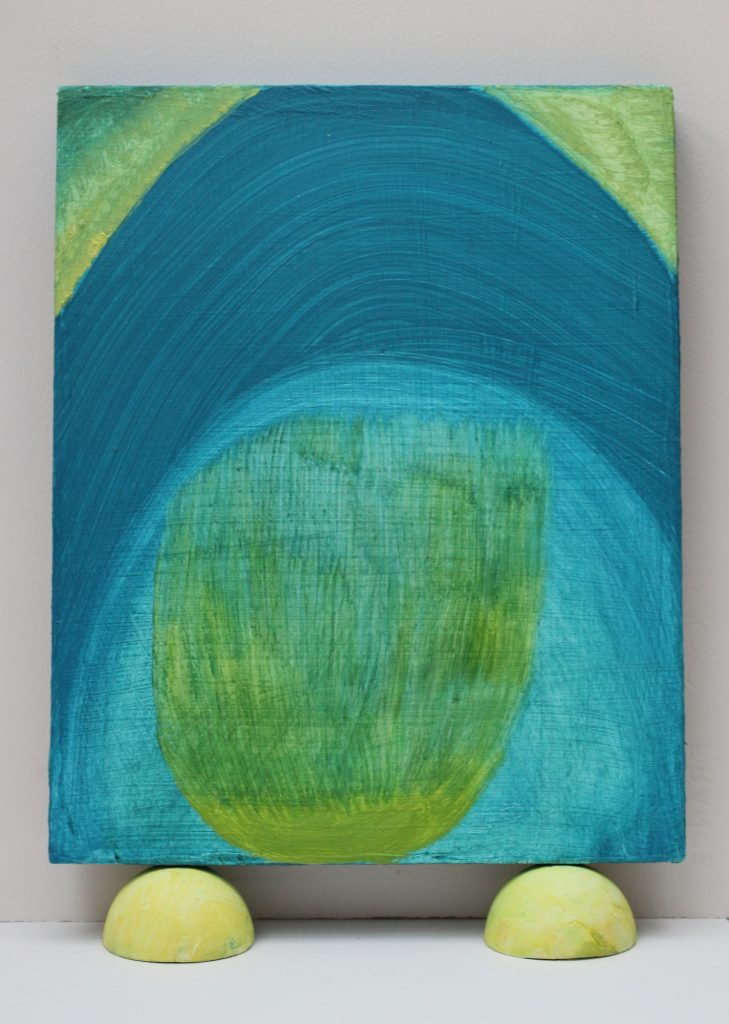 One of the things I absolutely love about your work is the way it evokes a spirituality through the use of colors and shapes (Kandinsky’s The Spiritual in Art comes to mind), but at the same time there is a physicality to your paintings with their three dimensional elements added to the canvas.  Can you talk a little bit about the choice you make to do this in certain works?    Is this part of the transformation you’ve mentioned?  Are you moving from the spiritual to the physical purposefully?

I am interested in how people seem to be both attracted and repelled by how the additional layers or wood attachments change the surface in a tactile way.  I am interested in what adding elements to the surface does both formally and conceptually.  This began because I was thinking about arches and windows in religious painting and architecture as a vehicle for transformation.  I would start by adding new dimensions to the panel surface by creating a raised arch shape, sort of like a window or capsule into a new space or interior.  I started to play with other materials like disassembling wooden chairs and attaching parts to the panel.  They speak to the painting as object.  I am interested in how bodily or strange adding objects to the panel can be.  I think that the spiritual and physical could be considered closely related. 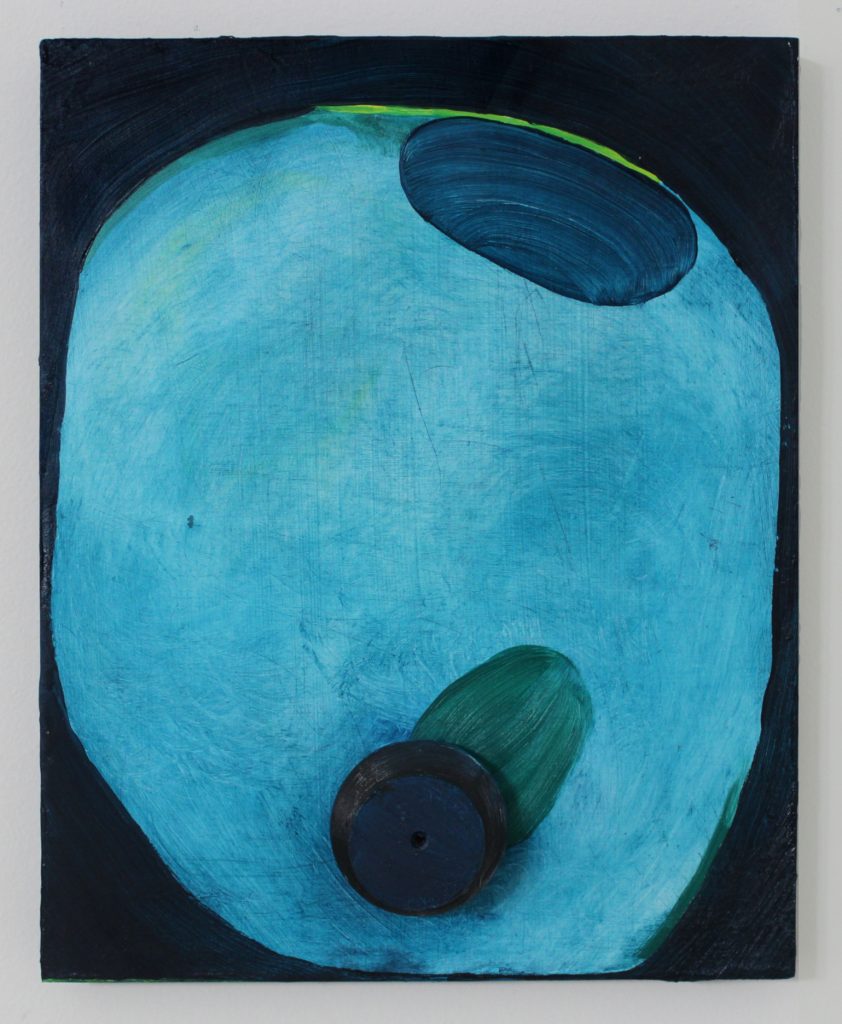 What first sparked your interest in rituals?

I have always been intrigued by different religions and the reasons for believing that certain observances could result in specific outcomes.  I am really interested in the material culture surrounding these beliefs.  I think that plays a large role in how I understand my work.

What are a few of your favorite art museums?

Some of my favorite museums are the Whitney Museum of American Art, the New Museum of Contemporary Art, and Dia: Beacon.

What artists inform your work?

I am interested in the work of Zilia Sánchez; she builds armatures for her paintings that allow the forms to protrude into space.  Another artist of interest is Eva Hesse, particularly her reliefs from 1965 that make use of ordinary materials. 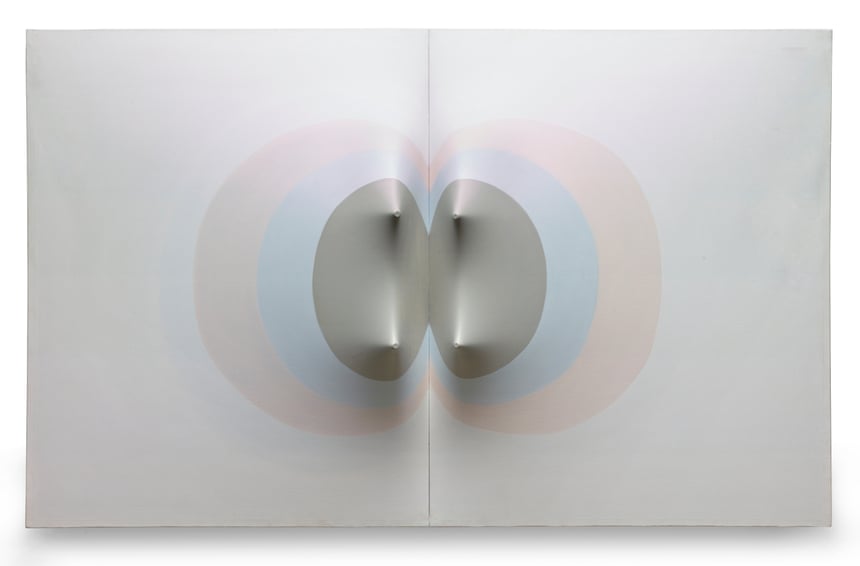 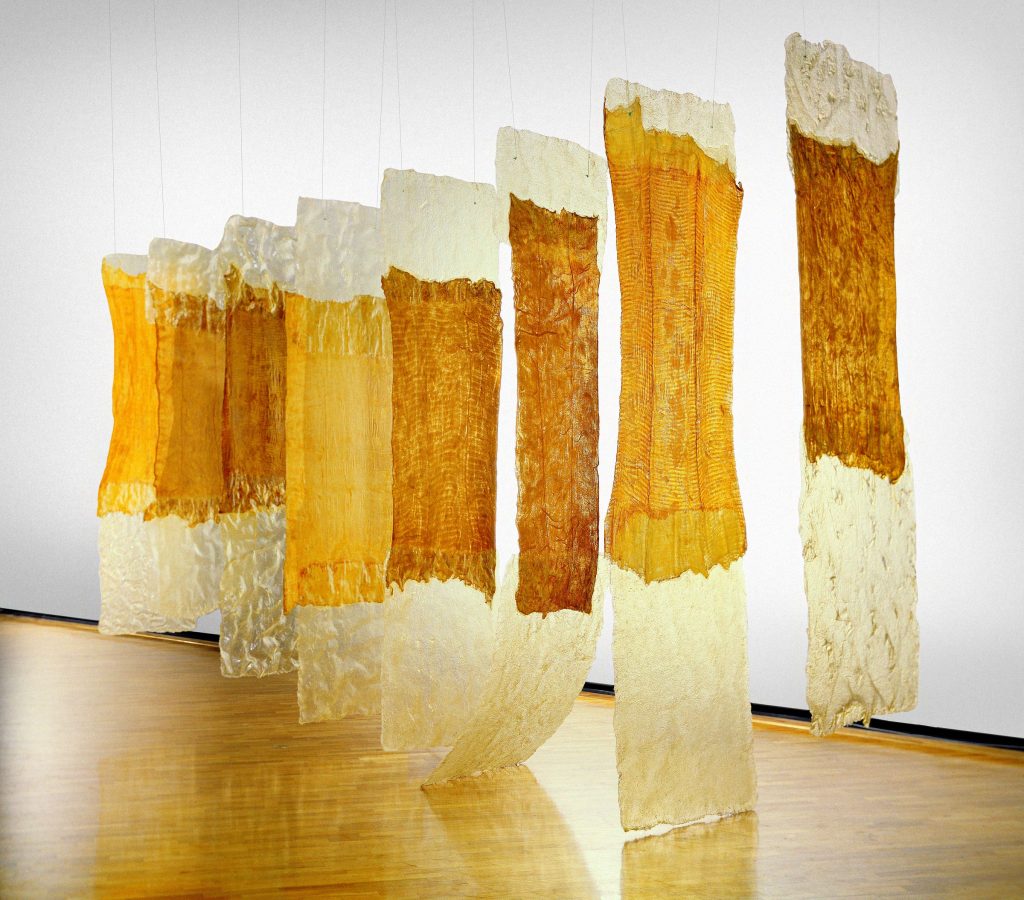 In general, what advice would you give to first year students?

I would emphasize the importance of studying something you are passionate about, being open to new opportunities, and completing internships while at Drew.

I am interested in being in a capacity where I could support other artists as well as continuing my studio practice.

I have work up in two group shows at artist-run galleries/spaces in NYC right now. 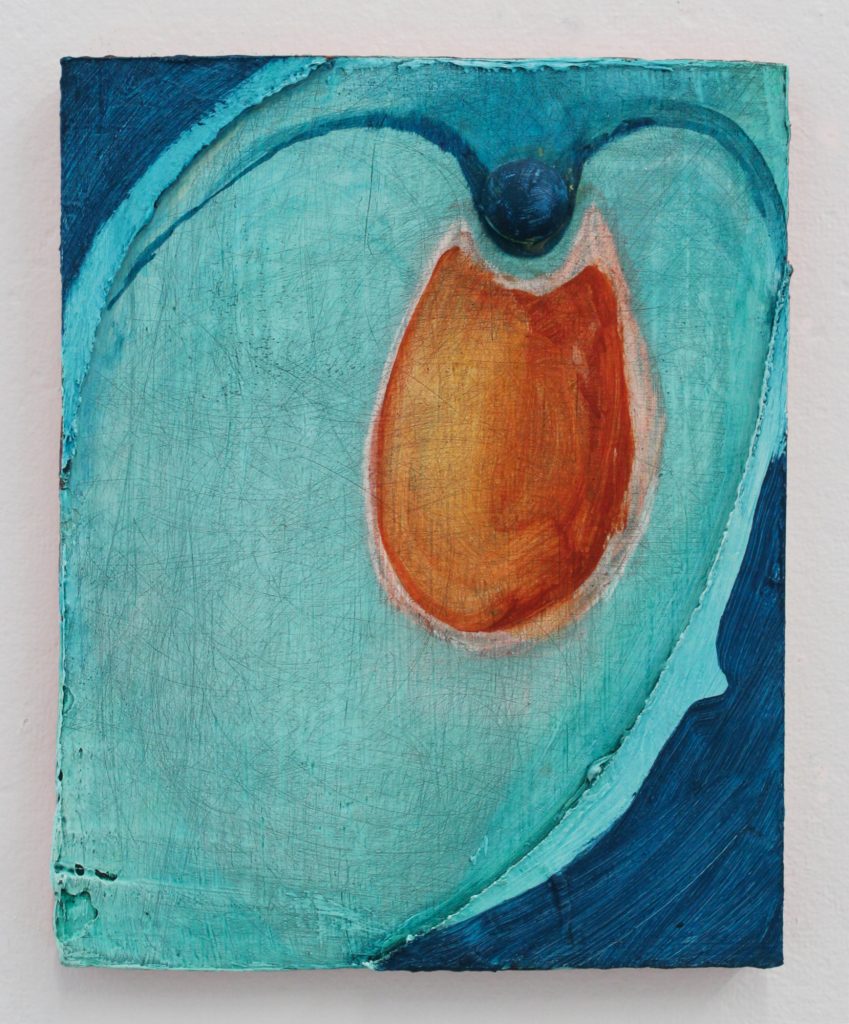 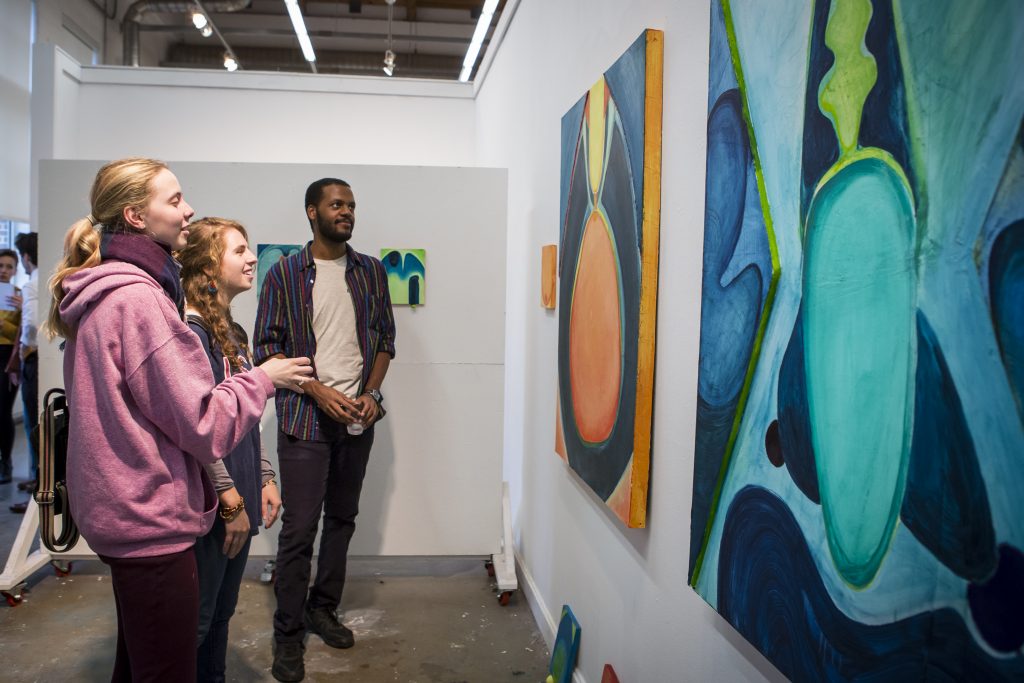 Check out Shayna’s exhibitions and other press HERE