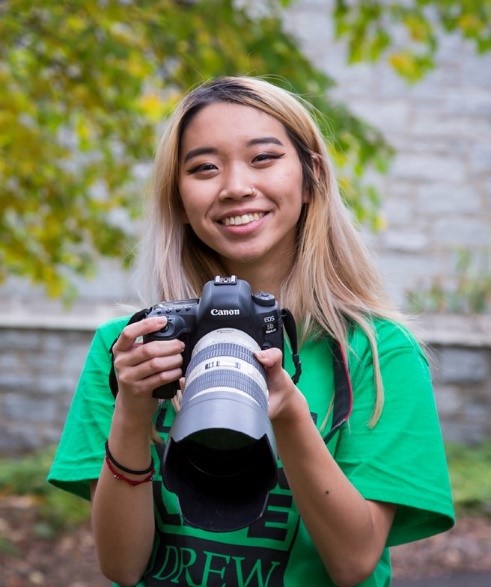 Joie is a multifaceted artist (digital art, videography, and photography) with demonstrated experience in documentary filmmaking, public relations, and video editing. She is dedicated to addressing inequality via artistic intervention. As a trilingual individual (English, Spanish, and French), she strives for inclusive storytelling across cultural/linguistic boundaries. Her goal after graduation is to find a job where she can freely explore her many creative talents and skills.

I was born in South Korea.  I was adopted at 6 months old and my family moved to Virginia. At 5 years old we moved to Maine.

Location.  I wanted to be close to the city so I drew a circle around NYC on the map and Drew University was in that circle. Because I came from a small town in Vermont, I thought city schools had too many students.  I found the best of both worlds here at Drew, since it was a small liberal arts university but easily accessible to NYC.

Did you know what you wanted to major in when you first came to Drew?

I came to Drew thinking I would study Business and Chinese because some people at my boarding school had pushed the idea that students who excelled academically should not pursue the arts, but as soon as I opened my first Microeconomics book I dropped the idea of pursuing Business. I decided I would pursue the arts in some way.  I thought about music because I play 6 instruments – piano, violin, guitar, bass guitar, ukulele and banjo, but I chose visual art.  I especially love creating videos because they bring together music, drawing, photography, and storytelling.

Do you work on or off campus?

I work in Instructional Technology, on Drew’s Media team as a Video Production Assistant.  I film and edit videos for the university, coordinate, schedule and run meetings with the Media and Video team, and serve as a mentor to younger students. I am a “go to” person.

I also work in Communications as a photography intern, photographing events and sports at Drew.  I am also a freelance photographer and design tattoos. 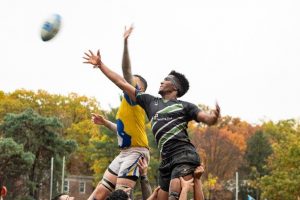 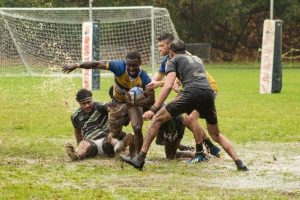 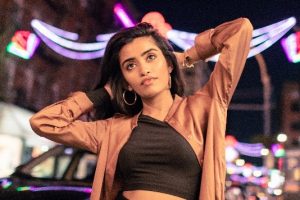 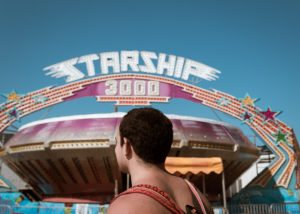 I currently have a video production internship with an on-line digital Asian magazine that started a year ago called Assienne.  I create and produce a weekly video series, and organize and conduct interviews.  It’s about female Asian-American representation in media.  I consider this magazine the Buzzfeed for young American Asian girls. It’s an unpaid internship but it’s exciting because I am on the ground floor of a great start-up and I have 100 percent control of my work.

I also had a Video Production Internship at Drew during the summer of 2019.

Have you done any NYC or shortTRECs or have you studied abroad?

Yes, I did the nycTREC on Communications and Media.

What are some of your favorite memories from the last 4 years?

One of my favorite memories was being part of a University acapella group as a sophomore. The highlight was opening up for the Rockettes at Radio City Music Hall.  This was particularly exciting for both me and my parents.

Another favorite memory that is also bittersweet, is connected to the death of my father. He passed away the summer before my junior year, and though I was grieving, I will never forget how supportive, kind and generous my friends and campus supervisors were during that time.  It was such a comfort to me.

Also, another favorite memory involves creating a documentary called Asian or American during my sophomore year.  I had never filmed with a camera before, but I learned how to do it, and I think it came out well.

What draws you to video production?

Videos have the ability to show not tell and through video I can expose audiences to other worlds and different cultural experiences. I grew up in an all-white neighborhood and Anthony Bourdain was my hero because he brought China and other cultures into my home.  Life is more than what we see in our little bubble.  Bourdain never acted like he was colonizing anyone.  He shared secrets with his audience.  That is the kind of understanding I want to bring to other people.  For instance, the NRA is appreciated by people in rural Maine because they feel the need to protect themselves. I want to show their side of the gun control argument because  I think it’s important to shine a light on different perspectives.

What are you most proud of?

I am most proud of the fact that I have overcome a lot of adversity.  After my father died, I realized what I wanted and knew I had to activate resilience within myself.  My drive to pursue the arts is one of the strongest things about me and I understand that the industry is not waiting for me.  I worked so hard to get to college, I don’t want to drop the ball now.

Hopefully I’ll be working in video production as in-house creative for a company that will give me artistic freedom aligned with my talents and skills.  Small start-ups usually give you more freedom.  Virtue is one such culturally driven company . I also hope to have my own art book in the near future.

If you could go back and give advice to your first-year self what would it be?

Major in art right off the bat and take some design classes.

In general, what advice would you give to first-year students?

Find what you like to do and do it hard!

I am trilingual – fluent in Spanish, French and English.