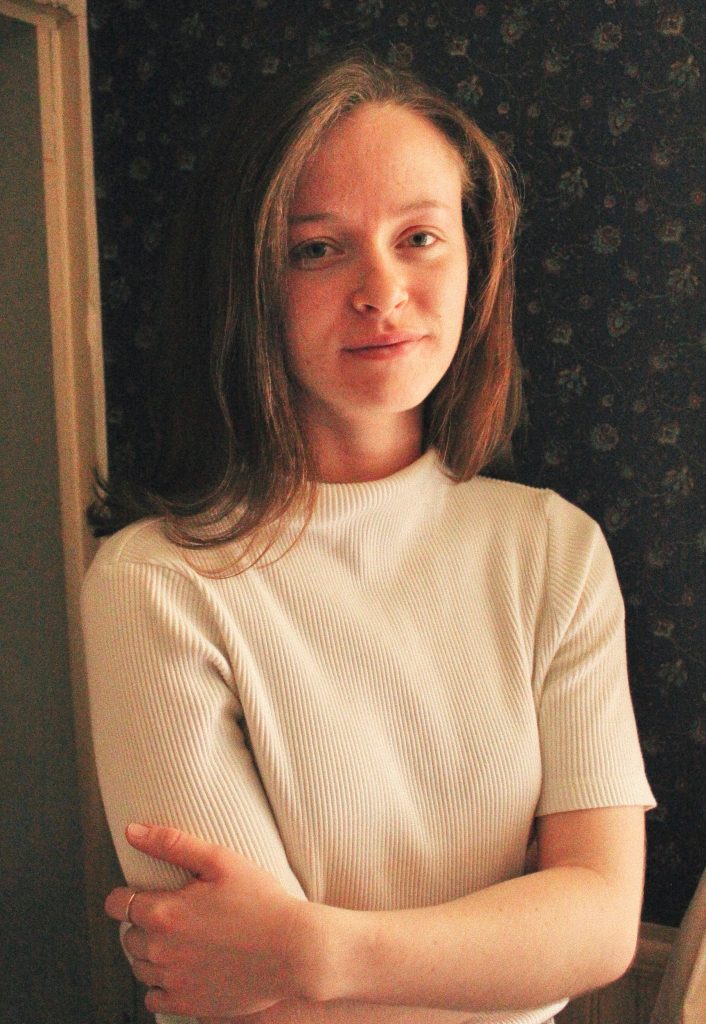 I was drawn to Drew for a number of reasons, the main one being the potential for connection with my peers and professors. The size of Drew makes it conducive to creating strong bonds both in and outside of the classroom which was of paramount importance to me. I am a fairly shy person until I am able to get to know the people around me. So I knew that I needed an environment that would allow me to build meaningful relationships with both my peers and professors. I also love nature and needed a space in which I could be which I could catch my breath after long hours of school work. All those factors landed me here, at Drew.

Why did you decide to major in Political Science and minor in English Creative Writing?

Political Science has always been about asking questions, demanding answers, and pushing for the improvement of life for all. I loved my first year Political Science classes, particularly, Introduction to Political Theory with Political Science Professor Dr. Sangay Mishra. His class was focused on the why aspect of the discipline, and stimulated my passion for understanding the mechanics of governance and why people behave the way they do in a political sense. I feel that Creative Writing is really where I found my footing at Drew. I’ve spent much of my time at Drew reading Walt Whitman’s poetry and journal entries. I never thought I had a knack for creative writing until I immersed myself in my first workshop with Professor Andrea Chapin. Through the mechanism of Creative Writing, I was able to better understand myself, draw important moments of introspection out onto the page, and deepen my awareness of the human experience across the backdrop of young adulthood.

I wanted to work for Genius for the longest time as a song lyric interpreter but I think I have spent most of my life dreaming about a number of different jobs. I could be happy doing anything, really, as long as I am learning something new most days and am around good people.

I have done a number of internships, mostly working on Congressional and local campaigns. Most notably, this past summer, I worked as a Communications Intern for Amy Kennedy’s Congressional race in New Jersey’s 2nd district. This was part of my work as a Kean Summer Intern. I did a lot of voter mobilization and messaging, which was a challenge in the way that we have had to work around a pandemic. Voter outreach was conducted mainly through long hours of phone banking, online surveys, and social media engagement. It was an interesting experience, as I got to work on a high-intensity campaign without being in the campaign field office which was so strange. I found this experience to be meaningful in the way it challenged my skillset of in person campaign work, and forced me to adapt to a changing campaign landscape.

Also, this past summer, I participated in the American Enterprise Institute’s Summer Honors Program which consists of 200 students from across the globe taking part in weekly seminars on various policy topics. Though this was not necessarily an internship, this has to be one of the most important and meaningful experiences I have had as an undergraduate. I was lucky enough to spend a week discussing social policy with some of the nation’s best students and scholars. My seminar was on “The Building Blocks of Human Flourishing” which was centered around understanding the ideal of happiness and our conception of fulfillment.

I have been so fortunate at Drew to have forged such strong connections with my professors. The entire Political Science department has had my back from day one at Drew. Professor of Political Science Dr. Patrick McGuinn is my major advisor and on my Honors Thesis Committee. His class on Education Policy was extremely meaningful to me because I come from a long lineage of teachers, which made the class poignant and topical. Dr. McGuinn is also someone who has challenged me and pushed me to think outside of my comfort zone, and approach my research with great care. Whenever I have needed advice, Dr. McGuinn has been there to offer it.

Professor of Political Science Dr. Phil Mundo has been my biggest advocate at Drew. I would not be where I am without his guidance. He is my Thesis Committee advisor and Political Science sensei in many ways. I have spent many hours discussing politics and my golf game with Professor Mundo, and have found him to truly care about my goals and ambitions. He is insightful, intelligent, and always has a way of keeping the conversation accessible even around tough topics. I have been fortunate to take 3 classes with Professor Mundo as well as my Honors Independent Study and Thesis. His approach is always the same: to provide students with the opportunity to both express their ideas and challenge them with tough questions. Plus, Professor Mundo has an admirable bobble head collection which has only strengthened his status as one of my favorite professors at Drew.

Have you studied abroad? Done any short or NYC trecs? 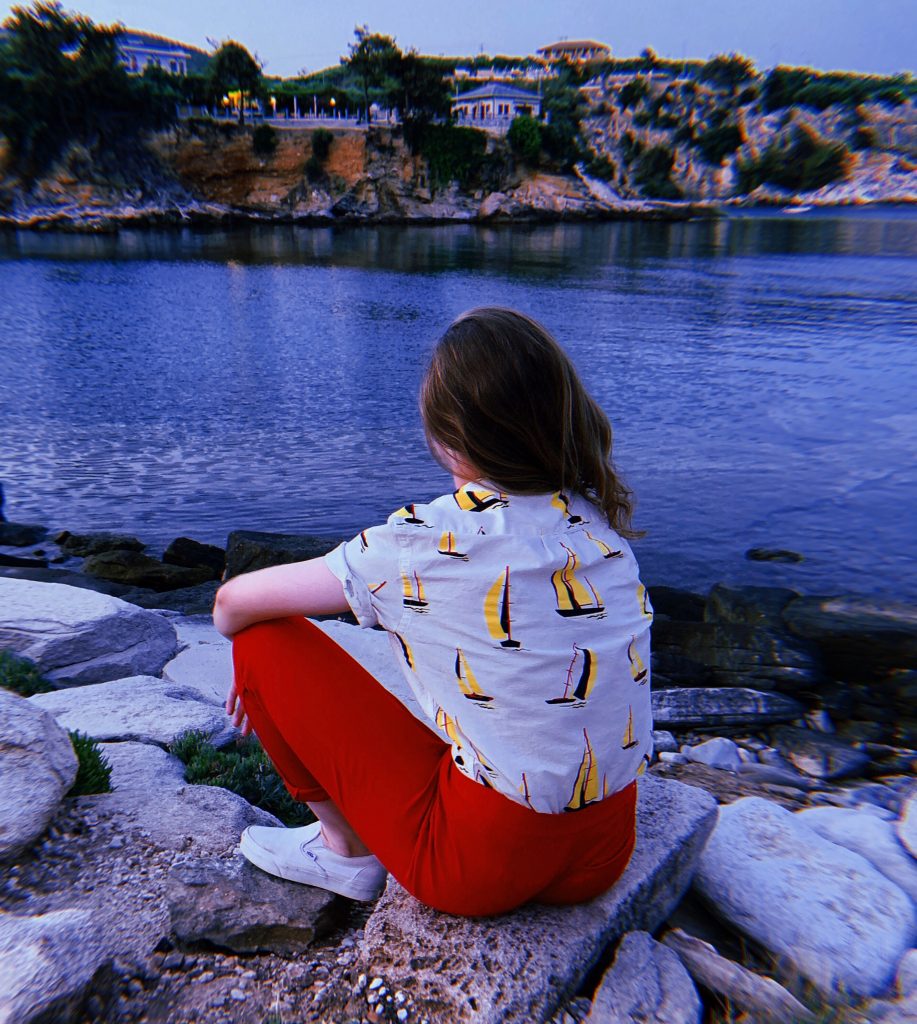 Looking out at the Aegean Sea in Thassos, Greece

I was lucky to study abroad in Greece the summer before my Junior year. I participated in the Writing Workshops in Thasos, Greece, where I studied poetry alongside both my peers at Drew and people of various ages from all over the world. I fell in love with Greece. It was an amazing few weeks of immersing myself in a truly magical place. We stayed at a family-owned inn on the top of this hill that overlooked the entire island of Thasos. I spent my days among locals, who talked to me about cooking and fishing and music. I especially loved learning Greek dance steps and attending Music Nights at the inn where everyone from town would come to dance and sing and eat. I also loved being able to write in front of the Aegean Sea and among the ancient ruins. It was such a lovely time, and I could not be more grateful for that experience. I cannot wait to go back, once traveling is safe again. 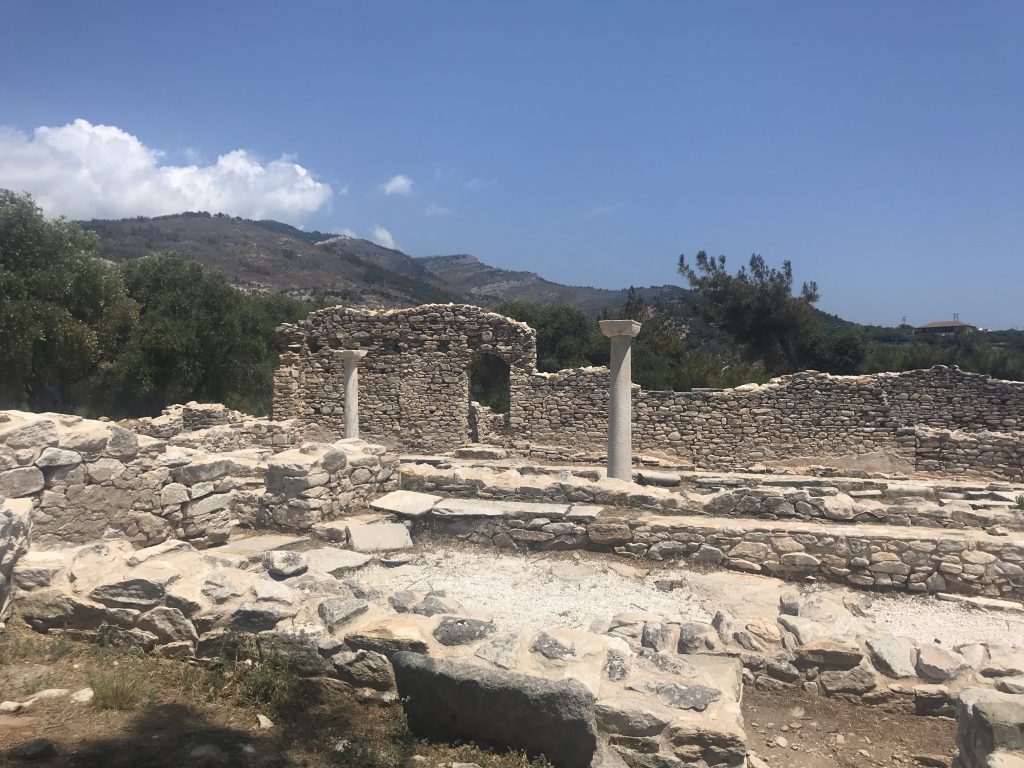 There are a number of issues that I find meaningful to me. As a Political Science major, I am constantly engaging with the question of how to make life better for all people. Of those issues that I find most important is access to education. Without a proper education, children are predisposed to a life of inescapable peril and challenges. America, despite its GDP and infrastructure, still fails millions of children every year with inadequate schools and teacher resources. There are studies that find correlations between lack of education and mental health issues, physical health problems, economic duress, and propensity to crime. Also, though it is not an issue that can be fixed with policies, I believe we are really at a lack of kindness in our world. Kindness is the driving force behind the decisions I make and how I interact with others. If we all were to prioritize being kind and considerate to one another, I think our world would be a much softer, gentler place.

I have so many amazing memories being at Drew. Most of them are centered around spending time with my incredible friends. Whether it be having a “family” dinner together, spending the evening talking and sharing stories in someone’s dorm, or taking a walk into town together for a coffee, being with my friends at Drew has been such a wonderful part of my college experience. Also, taking walks on campus has been something I have treasured throughout my time at Drew. I have become quite an avid walker, usually strolling campus in the evening while listening to music. I find this time to be so meaningful in the way that I usually think my clearest thoughts while walking, and I am able to really take in the beauty of campus in that headspace. Plus, it feels like I am in my own kind of movie, walking around under the trees and low streetlights to my favorite playlists. It’s very cinematic.

Don’t let your fear stop you from asking questions. It is so crucial to connect with people early on at a place like Drew because people really make your experience. Explore all sorts of academic avenues and make sure to not let anyone shape your values or ideals. At Drew, you are encouraged to think freely and for yourself, and it might be overwhelming, but creating your own set of ideals and visions for your academic and personal life is the most important aspect of your college years. Also, READ, READ, READ! One of my favorite song lyrics is “If you never read, you’ll never grow,” and that’s so true! I don’t just mean read your textbooks and assigned work. Read newspapers and poems and your old journal entries. Read about art and places you want to travel to. We live in the most information-accessible age, make sure to take advantage of that. And also, above all else, just have fun. College is an amazing opportunity to step into yourself. Enjoy that process of becoming YOU, because that is one of the best parts of life – and make sure to be gentle with yourself.

I want to get my MA/PhD in English or Political Science or both.  I have often dreamt of teaching English abroad for a bit, maybe in Greece or France or somewhere in Europe and then returning to the U.S. to be a Professor at a small liberal arts college. After that, I could see myself retiring to a countryside somewhere and owning a little farm and some corgis and baking lots of bread in my downtime. That’s not all going to happen in the span of 5 years, but it seems like a nice plan for now.

I am a fraternal triplet and have a photographic memory. I also listen to music fairly nonstop. My total acquired time listening to Spotify this past year is over 90,000 minutes, which in simpler terms is roughly 9 straight weeks of listening. It’s rare to see me anywhere without a pair of earbuds nearby.