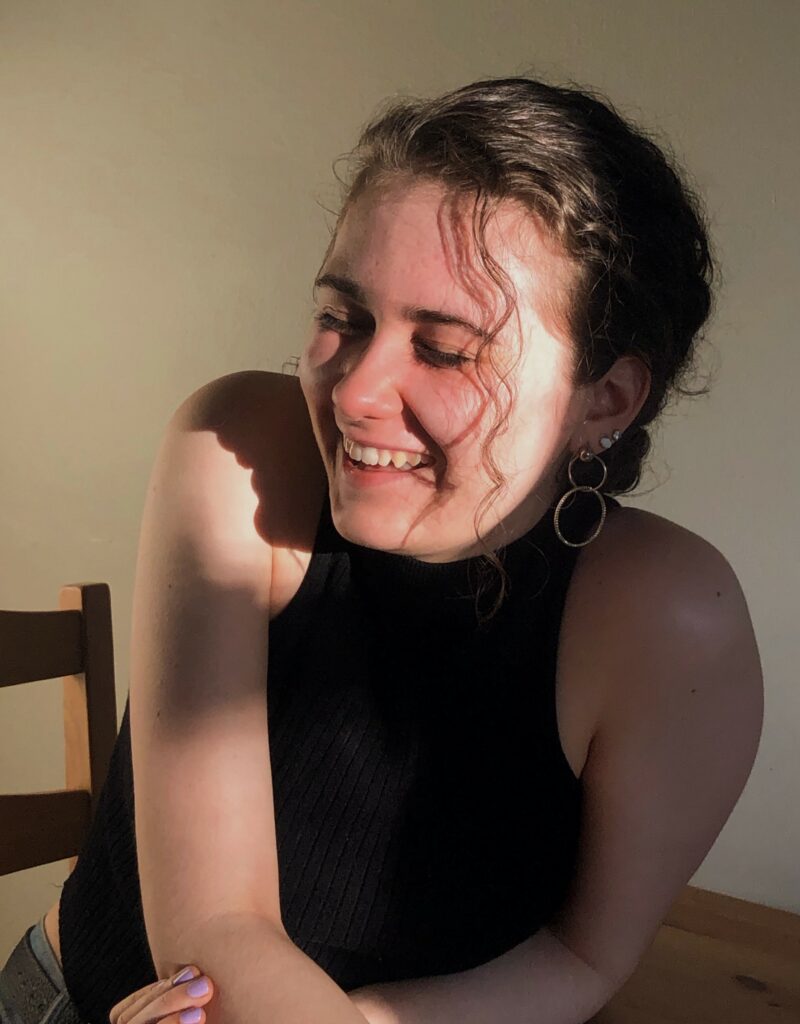 I was born and raised on a farm in Maryland.

I loved the campus the first time I set foot on it, despite it raining every time I visited up until I moved in. When I visited the first time, the people in the Theater department were so welcoming and kind to me, and took time out of their days to show me around and talk to me about what Drew had to offer. I felt like it was the sort of place where I could form long lasting relationships with the faculty and my peers, which is exactly what I wanted.

Why did you choose theatre as a major?

I’ve always loved Theater, and always wanted to study it, because I’ve seen and experienced firsthand the power it has to make people happy. I was very lucky to know that I wanted to be involved in Theater since I was a kid. However, the structure of the Theater major here has given me opportunities to explore and thrive in new disciplines.

When I started at Drew, I wanted to be an actress, but now, I have my sights set on a PhD in Theater, so I can continue to act and write, but also spend my time teaching in classrooms like the ones I’ve been so lucky to be in here at Drew.

The summer after my freshman year, I was the Community Engagement intern at Everyman Theater, Maryland’s leading regional theater. There, I worked to create experiences that went beyond the stage, such as art galleries and parties for patrons.

Last summer, I was a virtual acting apprentice with the Commonwealth Shakespeare Company in Boston, where I got acting training from some of the country’s leading professionals, without leaving my bedroom (which I was very sad about).

Professor Rosemary McLaughlin has been a great influence in my life here at Drew. As the playwriting professor, she has inspired me to start and to keep writing, and has taught me so much about how to improve. It is because of her and her guidance that I was able to win the Oxnam award for Playwriting, and that my newest play, Tony Ricci Has Acid Reflux, will be presented as the 2021 Developmental Set.

After my freshman year, I did the nycTREC where we worked on developing a new musical in New York City with industry professionals. It was incredibly informative about the behind the scenes work that goes into musical production, and it made me really appreciate everything that goes into creating professional theater.

To me, housing equality is incredibly important.

Some of my favorite memories at Drew are weekday breakfasts with my friends when our class schedules align, snow days spent holed up in Hoyt just talking for hours, having lunches on the lawn when the weather is nice, and sprinting around the DOYO trying to make costume changes in time.

It is vital that you make things happen for yourself. Reach out about opportunities, keep up on what is being offered, apply for as many things as possible.

In 5 years, I hope to be in the middle of a PhD program in New York or Boston, researching 20th Century Jewish Theatrical Comedy, and writing plays in the evenings!

As of now, I have never lived on a floor in a building at Drew that was not haunted!