The MHA is an equal housing opportunity agency that provides housing for low-to-moderate income families and seniors, and is recognized by the U.S. Department of Housing and Urban Development as a high performing operation.

Zabala was originally contacted by Morristown Councilman David Silva, who she has known for several years, who encouraged her to apply for the position, citing her personal interests, career aspirations, and life experiences. After being nominated during a town council meeting, Zabala was unanimously elected to serve as a commissioner for the agency. 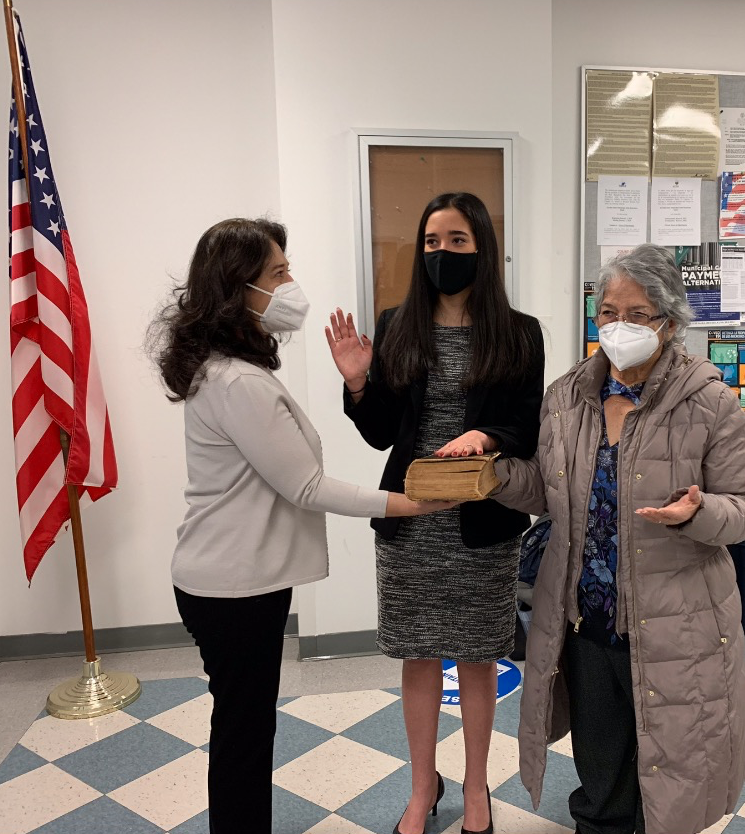 Zabala (middle) is sworn in with her mother (left) and grandmother (right) in support.

“As a young Latina who has had to deal with the affordable housing system personally, I have a broad understanding of the implications and obstacles of seeking public housing assistance, and I felt comfortable about taking on the role,” said Zabala, who will help set agency policies, pass resolutions, and review current and future programs and issues.

Zabala pointed to her academic career and experiences as a Civic Scholar at Drew for having helped prepare her for the position, from both a skills and knowledge perspective.

“As a Civic Scholar, my love for the community has grown exponentially over the past several years, and my business classes have helped me understand the financial components within my role. My time at Drew has prepared me to fulfill my responsibilities as a MHA commissioner,” said Zabala, a double major in business and political science, and a minor in law, justice, and society.

“I have been able to connect my personal experiences with academic research and studies at Drew. I have learned about the many issues that remain within the public housing system, the possible ways to ensure the system is as effective as possible, and ways to build a system that better serves our neighbors in need. I strongly believe that because of my past experiences and academic training, I can be a valuable asset.”

For Zabala, this position has allowed her to achieve a goal she set for herself as a first-year student.

“I told myself I would be an advocate on behalf of affordable housing,” she said.

“As the youngest commissioner, I will draw from my recent teenage experience navigating affordable housing to influence operational changes at the Housing Authority that will structure a housing system that is accessible, responsive, and that meets people’s needs.”

Though graduation looms in May, Zabala plans on sticking with the MHA throughout her post-graduate plans of attending law school and eventually starting a nonprofit aimed at helping children in underserved communities.