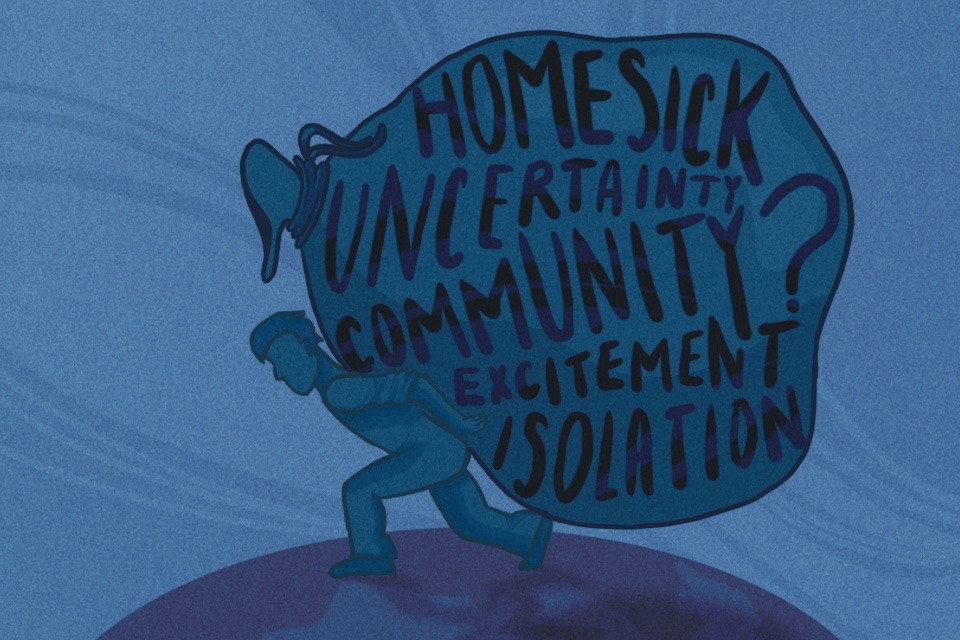 Challenges that international students face as they are away from home

When you travel to a different country for your education—whether it’s across the pond or the globe—you probably have certain expectations about what your international education will look like. Perhaps shaped by Hollywood films or by a wild imagination, the idea of a fresh start in a new place and community, as a new person, sounds exciting. Romantic. Exhilarating. But the reality that follows these colorful expectations can’t always be anticipated.

The international student experience at Columbia is a special one, and there’s no one-size-fits-all approach to even begin to dissect it. But as the weather transitions and new routines begin to set in, we wonder: How are members of our international community feeling midway through this fall semester? We sat down with two international students to learn more.

“I don’t know how well I’m doing, but I can definitely say that I’m doing my best. I’m trying my best,” Armaan Bamzai, CC ’25, shares on Zoom. He wears a red jacket over a mustard-yellow shirt and reflects on where he grew up, queerness, and the culture shocks he’s been experiencing since moving onto campus two months ago. Armaan is from South India, and his family is from Kashmir, in North India. While he’s been to the United States before, he admits that it all feels very new.

When asked about the adjustment to this new environment, Armaan reflects on assimilation. “Part of me feels like it’s a bad idea to assimilate because that’s what’s required in order to adjust. I’m trying to resist that. I have an urge to integrate and become very American.”

Assimilation is defined as “the process whereby individuals or groups of differing ethnic heritage are absorbed into the dominant culture of a society,” according to the Encyclopedia Britannica. Armaan describes experiencing this assimilation in a way that may feel minute, but is deeply consequential: “In some ways, I think I tend to resist the urge to adapt too much. But in a lot of ways I’ve had to change my accent when I talk to white people or people from [the United States]. And getting used to the public transport system. And sidewalks—we don’t have sidewalks in India—or pedestrian crossings. I think a lot of small things are taking some time.”

Community for Armaan, interestingly, is something he has found among Pakistani students. He recalls attending events led by the Organization of Pakistani Students and how he has found himself relating to many Pakistani traditions and customs—which makes sense geographically, as Kashmir is on the border between India and Pakistan. There’s a wide smile on his face as he recollects a screening OPS recently had of the cricket match between India and Pakistan. “In India, that’s a huge event, it’s the event of the year that everyone’s counting down for. Experiencing that, which I didn’t expect to have here with the community, was really magical.”

Beyond that, Armaan shares that he’s made a point to branch out since arriving at Columbia, noting that he’s doing his best to make friends from different communities. He describes Columbia as a melting pot of cultures and traditions and adds, “There’s a lot of really wonderful people from very different places who have so much to offer, and I think it would be kind of a waste if I didn’t learn from that.”

A struggle that Armaan expected but still found deeply unfamiliar was becoming a minority. Having previously been a man in the racial and religious majority, this shift in environment has prompted him to examine his status and roles in a different light and lens.

Another struggle with moving away and entering a new space, naturally, is homesickness. Armaan explained that this particular struggle only emerged recently and was evoked by the celebration of Diwali. His means of dealing and working through these feelings have been meditation. “I like to acknowledge my homesickness and think about it. I think about the reasons I’m feeling homesick, and meditate on it for like 30 minutes. And if I feel better, then that’s a short-term fix. And if I don’t, then I call my mom.”

What keeps Armaan centered despite all of these changes are reminders of home. Gently, he describes how home continues to be where he was born and raised. At the same time, Columbia is another home for him now. Armaan thinks of himself as being rooted in those two places simultaneously: “You’re both very much tangibly here at college in the U.S., but you’re also very much at home. And your presence is important and beautiful in both places, and both places are ready to welcome you, whatever you choose.”

Whereas Armaan expressed feelings of homesickness and resistance to assimilation, other international students have not experienced these struggles. Vivian Chen, BC ’24, sits at ease in her apartment as her interview begins. She smiles as she starts to describe her hometown. Vivian was raised in Shanghai for the last 18 years of her life, and although she too would occasionally visit the United States, New York was still a foreign place to her before she moved onto campus. Unlike Armaan, however, she hasn’t experienced homesickness yet.

Her time in New York City has been a fascinating new experience for her. She has found that the culture in the United States is much more individualistic than it is in Shanghai—in the United States, she feels the freedom to wear whatever she desires without judgment from others. For example, Vivian can walk the streets without a bra on and still feel comfortable. She says that her body image has improved in New York City as well. “In China there is a very strict set of beauty standards,” she says, “but here, there are more varieties and more acceptance for differences.” It is these things that made her not only fall in love with New York but also prevented homesickness.

Vivian chose to live in her own apartment, and to her surprise, the experience has been more challenging than anything else she has had to adjust to. “This is my first time leaving my parents, I’ve never lived without my parents,” she says. Loneliness creeps in, since she is used to being surrounded by loving, caring family members. The cooking, cleaning, and other daily chores are also a novelty to which she has had to adjust.

She also notes that she feels scared walking back to her apartment at night, since the safety here in New York is lackluster compared to Shanghai. She notices that the differences in safety are embedded in everyday life: “In Shanghai, I can walk in the park whatever time I want, and I can walk on the street. I can wander on the street almost everywhere.” Above all, when she feels sick, she misses home the most. In Shanghai, if she felt even the slightest bit unwell, her family would take extensive measures to ensure her health. Unfortunately, the reality of college life is that students must learn to fend for themselves.

Friendship is one of Vivian’s biggest priorities. Although she hasn’t joined any clubs and doesn’t live on campus, she has found friends in people she knew in high school or others in the international student circle. To her dismay, she hasn’t been able to establish lasting friendships with the people in her classes. Wearing a mask, Vivian says, is one of the biggest barriers to communication. Not being able to see each others’ faces and expressions really stunts her ability to make connections. Vivian wishes she could make friends that come from a greater variety of backgrounds.

When asked to give advice to incoming international students, she underscores the importance of building a strong support system of genuine friends. She also cautions not forcing yourself into uncomfortable friendships. Instead, she advises, reach out and take your time, and friendships will form. “You can go to the lawn and say hi to people,” she says with a smile on her face, “just be nice, and that’s how you make friends.”

Staff writer Charlotte Wu can be contacted at charlottewu@columbiaspectator.com. Born in New York but raised in Shanghai, Charlotte is also an international student.